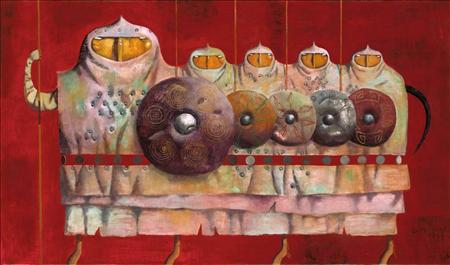 An opening reception for “Steppe Nirvana,” a collection of recent works by renowned Russian artist and sculptor Zorikto Dorzhiev, will be held on December 18th, from 6-8pm ET. The exhibit will run at Tibet House Galleries from December 18th through the 27th. Dorzhiev’s painting “Nirvana 3s” is a featured auction item at Tibet House US’ 2013 Benefit Auction at Christie’s, taking place on December 16th. Visit www.tibethouse.us for more information.
ABOUT ZORIKTO DORZHIEV: Zorikto Dorzhiev is known for his visceral and dynamic work that pays tribute to his Buryat heritage. Born in Ulan-Ude, in the region of Russia bordering Mongolia, Dorzhiev graduated with honors from the Krasnoyarsk State Art Institute. After mastering his skill with several well-known Siberian artists, he has been exclusively represented by the Khankhalaev Gallery in Moscow, Russia since 2005. “Steppe Nirvana” is a collection of Dorzhiev’s most recent works, created between 2011 and 2013. Dorzhiev’s works were showcased at numerous art expos and fairs, including Art Basel, Miami and the New York Art Expo. He’s had solo exhibits at the The Victoria and Albert Museum in London, The Russian Museum in Saint-Petersburg, The Museum of Eastern Art in Moscow, and galleries in Luxembourg, Strassburg and Brussels, Hong Kong and Taiwan. Dorzhiev’s paintings, drawings and sculptures are part of the permanent collection in several Russian Museums and in private collections across US, Russia, UK, Europe and Asia.

Tibet House US, established in 1987 at the request of His Holiness the Dalai Lama, is a non-profit educational institution and cultural embassy working to preserve, restore, and present Tibet’s unique cultural and spiritual heritage by means of a permanent center, with a 2,000-square-foot gallery, library, archives, developing traveling exhibitions, print publications, and media productions. LOCATION AND HOURS: Monday – Friday from 11 am – 6 pm Sunday from 11 am – 4 pm www.tibethouse.us