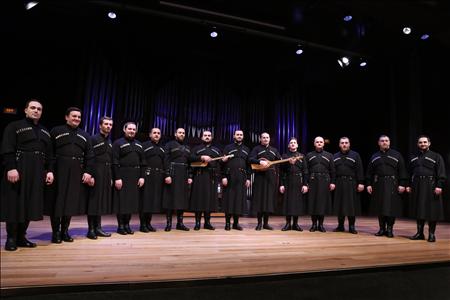 One of Europe’s most exquisite vocal groups and the inheritors of the Georgian choral music legacy, the all-male Ensemble Basiani returns to New York for a one-night only performance, as part of their US tour. Wearing all-traditional costumes, Basiani captivates audiences with a program featuring folk and sacred songs, highlighting the world’s oldest polyphonic music tradition, full of complex harmonies and heart-warming colorful melodies. Georgia is home to one of the world’s most fascinating musical cultures. At once ancient and modern, this rich and evolving polyphonic choral heritage is inextricably bound to church, folk traditions, and national identity. The sensuous, exotic sound of Georgian choral music is a rare and thrilling experience. Restless harmonies combine with unexpectedly abrupt shifts in mood to create an unforgettably distinctive language—this is emotive, passionate music of seemingly boundless variety, invention, and sophistication. This incomparable musical legacy melding musical and sacred traditions is one the greatest and most ancient examples of the art of the song.