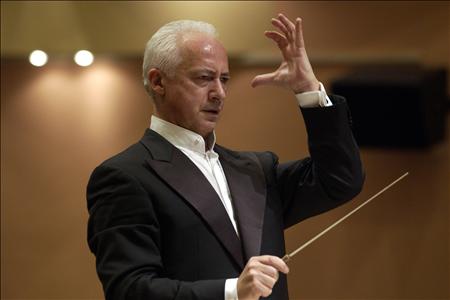 Founded in 2003 at the initiative of the Russian President Vladimir Putin and the Ministry of Culture, the National Philharmonic of Russia has quickly become a musical symbol of the new Russia. Artistic Director and Principal Conductor Vladimir Spivakov has assembled some of Russia’s intrumental elite into an ensemble combining technical virtuosity with a rare capacity to become immersed in the music and draw the audience into that experience. National Philharmonic of Russia is making music on the highest level and touring the world making the enrapturing purity of their sound and their stunning musical command available to all. Please check the official website of the orchestra for more information www.nfor.ru/eng/index.php

Joining Maestro Spivakov is the extraordinary young Russian pianist, Denis Matsuev. One of the brightest and most gifted graduates of the Moscow Conservatory remarkable for his “perfect technique and artistry,” Denis Matsuev is a rising star becoming known internationally for his brilliant interpretations of the great Romantic period piano repertoire, including Lizst, Schumann, Chopin and Rachmaninoff. Gold medalist at the 1998 International Tchaikovsky Competition in Moscow, Mr. Matsuev has appeared on tour in the US with the Bolshoi Symphony, Russian National Orchestra and the Russian State and in more than 400 cities world-wide, with recent performances in Lyon, France; Seoul, Korea; Warsaw, Poland; Sydney, Australia; Beijing, China and Tokyo, Japan.

“Spivakov and company had an abandon that made the music’s drama hit home. The sheer range of the orchestra’s sounds, from murmurs to flashes, played up the phantasmagorical streak that runs through the whole piece.”
—The Charlotte Observer

When a visiting orchestra unfurls its colors as proudly as did the National Philharmonic of Russia at its Chicago debut Thursday in Orchestra Hall, it makes one nostalgic for those days when ensembles were instantly recognizable by the distinctive national styles reflected in their performances.

Formed in 2003 with the support of former Russian President Vladimir Putin, the orchestra under Vladimir Spivakov, the violinist turned philharmonic artistic director, represented its musical heritage with a program of Tchaikovsky and Rachmaninov that attracted a large Russian-speaking cheering section.

The big Russian Romantic style comes easily to Denis Matsuev, who unleashed a mighty torrent of pyrotechnics as soloist in Rachmaninov’s Piano Concerto No. 1 and Scriabin’s Etude in D-Sharp Minor. But a tendency toward vulgar barnstorming proved worrisome, much as it did at the gifted pianist’s Ravinia debut last summer.

Proving himself almost as articulate waving a baton as his violin bow, Spivakov brought passionate sweep to “Romeo and Juliet” while balancing symphonic weight and balletic grace in the “Sleeping Beauty” excerpts, which were further distinguished by flavorsome woodwind and harp solos.

The three encores worked the crowd to a frenzy of whistling and rhythmic applause. These consisted of the waltz from Khatchaturian’s “Masquerade,” an adagio by Alfred Schnittke and a dance from Jeronimo Gimenez’s “La Boda de Luis Alonso.” It will be a pleasure to hear this splendid orchestra again.

The final season of the Concert Association of Florida was, fittingly, framed by Russian orchestras: Valery Gergiev and the Mariinsky Orchestra last November and Vladimir Spivakov and the National Philharmonic of Russia Friday night at the Adrienne Arsht Center.

In between, the forty-year old presenting organization folded in February, but the Arsht Center stepped in and picked up responsibility for the remaining Concert Association events at its venue, for which it deserves an ovation by all local music fans. Even more heartening, in an interview with South Florida Classical Review on Friday, Arsht CEO John Richard said that the center would inaugurate a new classical series this fall, welcome news that Miami audiences will still get to hear great touring artists and orchestras.

Friday night’s performance by the National Philharmonic of Russia certainly made the case for such a series, with an enthusiastic—and remarkably well-behaved—audience of around 2,000 filling the Knight Concert Hall for a program of Russian warhorses.

There is a bewildering supply of Russian orchestras and, more often than not, they seem to be led by violinist-turned-conductor Spivakov. Yet the National Philharmonic is clearly among Russia’s finest, as well as its youngest, formed just six years ago. From top to bottom, the ensemble is comprised of virtuoso musicians who perform with wonderful character and enthusiasm, many players fairly jumping off their chairs with intensity. The opener, the Polonaise from Tchaikovsky’s opera Eugene Onegin, made a worthy calling card, for the orchestra’s rich, dark strings.

Initial disappointment that soloist Mayuko Kamio would perform the more populist Tchaikovsky Violin Concerto rather than the originally scheduled Sibelius, dissipated upon reading that the young Japanese violinist was the Gold Medal winner at the 2007 Tchaikovsky Competition.

Kamio has technique to burn with a strong bow arm and virtually faultless musicianship. An individual interpretive profile was less evident Friday, though in the first movement, Kamio observed dynamic markings closely and played with precision and taste, if some rhythmic heaviness, her stately tempos in no way playing to the gallery.

In the Canzonetta Kamio brought refined delicacy and half-tones to her solo passages, as well as daunting fire and bravura to the finale. The violinist’s very physical virtuosity sailed through the technical landmines with remarkable speed and accuracy, Spivakov and the orchestra providing attentive support.

On the second half, Spivakov showed he clearly has a close-knit relationship with his orchestra in Stravinsky’s Divertimento, The Fairy’s Kiss.

For a commission marking the 35th anniversary of Tchaikovsky’s death, Stravinsky mined several lesser known Tchaikovsky themes for this fantastical ballet. This hybrid confection retains the melodic charm of Tchaikovsky’s original material, but provides a sly injection of Stravinsky’s own acerbic qualities in the rhythmic curveballs, insistent dynamic contrasts and quirky woodwind writing.

This is difficult music to bring off, yet Spivakov and his players delivered the goods magnificently, conveying the wry wit of Stravinsky’s retooling as well as the warmth of Tchaikovsky’s melodies. The Russian players made this into a kind of off-kilter concerto for orchestra, the musicians shining collectively and individually with personality-plus oboe, clarinet, trumpet and cello solos.

Prokofiev’s Romeo and Juliet remains the most overprogrammed work in South Florida by visiting orchestras, but Spivakov and colleagues brought such freshness and idiomatic finesse to three familiar excerpts that it was hard to cavil.

Rather than the hyped-up volume of many (non-Russian) conductors, Spivakov brought out the ballet’s scoring ingenuity and refinement, with the central section of Montagues and Capulets having a dreamy languor to balance the malign march-like outer sections. So too, there was plenty of whirlwind velocity in the lightning string runs of The Death of Tybalt, but the massive murder chords were less bludgeoning than usual, and more steely and pointed, making for an even more chilling effect.

The enthusiastic ovations brought Spivakov back for a generous supply of encores: a darkly elegant rendering of Sibelius’ Valse triste, the Spanish Dance from Tchaikovsky’s Swan Lake (with a spectacular trumpet solo), a brightly Latinate Intermezzo from Gimenez’s zarzuela, La Boda de Luis Alonso, and rounding off an enjoyable evening with the frenzied Georgian Dance from Khachaturian’s Gayne ballet. 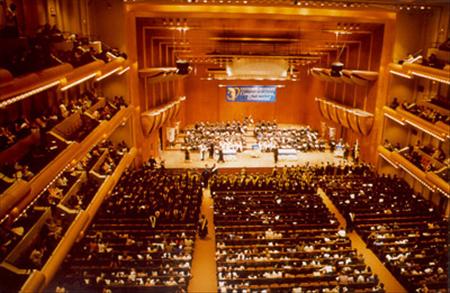