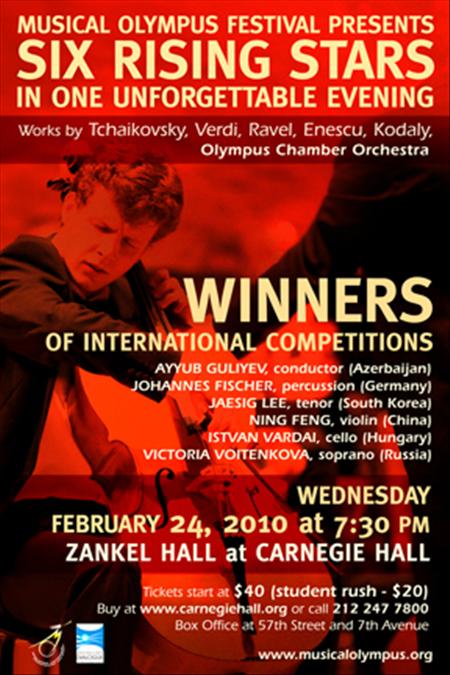 Ayyub Guliyev was born in 1984 in Baku, Azerbaijan. In 2005 he graduated from Baku Music Academy, and continued his education at the St. Petersburg State Conservatory and later at the Vienna State University of Music and Fine Arts. Mr. Guliyev has studied with Daniel Harding, Riccardo Capasso, Yuri Simonov and Rauf Abdullayev.

Upon the decree of the President of Azerbaijan Republic, Ayyub Guliyev was included in the Presidential “Golden Book of Young Talents” and received a Presidential Scholarship to continue his education; he was also awarded national prizes in 2006 and 2009.

ISTVÁN VÁRDAI, CELLO (HUNGARY)
“István Várdai is a special kind of genius… his performance is breathtaking with perfect intonation, adequate interpretation, impeccable tempo, in short, he is an incredible virtuoso” (Parlando)

When István, the young cellist goes on stage, many in Europe know by now, what to expect: magic.

Since his 1998 début concert in Hague, The Netherlands, Mr. Várdai has performed in London, Florence, Kobe, Frankfurt, Moscow and Munich with great success. Past collaborations have included Jenő Jandó and Barnabás Kelemen with the Philharmonic Orchestra of Pécs, Hungary, conducted by Zsolt Hamar. In the summer of 2006 he was honored to perform with Radovan Vlatkovics (horn) at the International Music Festival in Santander, Spain.

Mr. Várdai studied at the Franz Liszt Academy of Music in Budapest under László Mező and at the Music Academy of Vienna under Reinhard Latzko; he also participated in master classes with Natalia Gutman, Natalia Shakhovskaja and János Starker.

NING FENG, VIOLIN (CHINA)
Ning Feng was born in Chengdu, China, where he started the violin at age four. He studied at the Sichuan Music Conservatory, and in 1998, was invited as a full scholarship student to study at the Royal Academy of Music in London. There he participated in a master class with the late Lord Yehudi Menuhin, who invited him to perform in Germany at one of the last concerts he organized.
In June 2003, Ning Feng became the first student ever to be given a perfect score (100%) for his final recital (end of study exam) in the nearly 200 years of Royal Academy of Music history, and was elected as an Associate of the Royal Academy of Music.

Ning Feng is based in Berlin and performs actively all around the world. He plays a Peter Stefan Greiner violin (Bonn 2005), kindly on loan from the Deutschen Musikinstrumentenfonds, and made available through the Deutsche Stiftung Musikleben.

In 2005, Ning Feng’s first solo CD was released in China, and he’s also recorded for JVC Records and Triton Records in Japan and Cypres Records in Belgium. His latest CD, “Mr Paganini” was released on Channel Classics in the Netherlands in 2007.

JAESIG LEE, TENOR (REPUBLIC OF KOREA)
Jaesig Lee was born in Jinju, South Korea. He is a graduate of the Korean National University of Arts in Seoul where he studied with Gwangsun Song. His stage experience includes the role of Alfred in “Die Fledermaus” at the Seoul Hanjun Art Center and performances in numerous opera gala concerts in Korea and abroad.

Mr. Lee is a winner of many national and international competitions such as the Um Junghaeng Singing Competition (Second Prize), Sejong Music Competition (Grand Prix) and the Vision Voice Competition (First Prize).

In March 2009 Jaesig Lee was awarded the Grand Prix at the Maria Callas Grand Prix International Competition in Athens, Greece.

VICTORIA VOITENKOVA, SOPRANO (RUSSIA)
Victoria Voitenkova was born in St. Petersburg where she began her vocal studies at the age of 9 under the tutelage of distinguished soprano Inessa Prosalovskaya. In 2004-2005 she studied with Horst Guenther in Zurich and went on to study at the Zurich Conservatoire. Currently she is in her second year at the Hanns Eisler Hochschule für Musik in Berlin.

From the age of 13, Ms. Voitenkova performed at international festivals and gave solo recitals in the premiere concert halls of St. Petersburg, Moscow and Europe. In 2004 Victoria performed in Bobby McFerrin’s shows organized by the Musical Olympus Foundation in Moscow and St. Petersburg.

In 2009 Ms. Voitenkova won First Prize at the XV International Opera Competition “FERUCCIO TAGLIAVINI” in Graz, Austria in the age group under 24 years old, and was also awarded the “Best Soprano Finalist” prize.

JOHANNES FISCHER, PERCUSSION (GERMANY)
Born in 1981 in Leonberg, Johannes Fischer began music lessons at the age of nine. From 2001–2006 he studied at the Freiburg Music University and has since pursued advanced studies there in percussion along with studies in conducting and composition.
Mr. Fischer has been awarded several prizes as percussionist and composer including First Prize, Audience Prize and 3 other special prizes at the 2007 ARD Music Competition; Second Prize at the 2002 International Guenter Bialas Composers Competition; First Prize at the German National Music Competition; with the “Eardrum” percussion duo he won the 2006 German University Music Competition along with scholarships from the Juergen Ponto Stiftung Frankfurt, and the Deutsche Stiftung Musikleben. In 2007 with support from the Gerd Bucerius Scholarship, he was artist in residence at the University of California San Diego where he worked with Steven Schick.
Johannes has a busy concert schedule as soloist and chamber musician with the Freiburg Percussion Group, the duo “Apeiron”, the Ensemble “Aventure”, and the Bavarian Chamber Philharmonic. Collaborations with composers and conductors have included Peter Eötvös, Harrison Birtwhistle, Klaus Huber, Isabel Mundry, N.A. Huber, Heinz Holliger and Pierre Boulez.
He has performed at music festivals in Asia, North America and Europe. As a composer he’s been commissioned by the Crested Butte Music Festival in USA; the Lucerne Festival Academy; the Junges Klangforum Mitte Europa and the Louvre in Paris in cooperation with the Lucerne Festival.
Since 2006, Johannes Fischer has taught percussion at the Conservatory of Music in Lugano, Switzerland. In Spring 2008 his debut CD was released on OehmsClassics.
The Concert is sponsored in part by World Public Forum “Dialogue of Civilizations” www.wpfdc.org/ 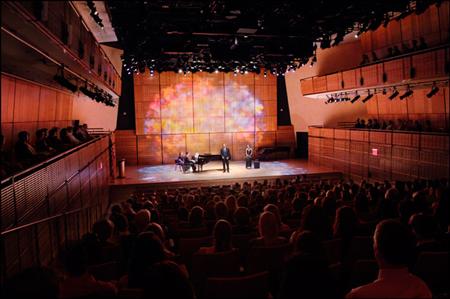