All tickets for the postponed shows in January will be honored on the rescheduled dates in June.

Hailed “as the successor to Russian keyboard lions like Evgeny Kissin, Arcadi Volodos, and … Vladimir Horowitz” (The New York Times), Denis Matsuev has been establishing himself as one of the most sought-after pianists of his generation. Ever since his triumphant victory at the 1998 International Tchaikovsky Competition in Moscow, he has been winning acclaim from critics and audiences alike for his combination of stunning virtuosity and clear artistic identity. The dynamic pianist returns to Sanders Theatre and Strathmore Hall for a recital of works by Haydn, Schumann, Tchaikovsky, and Rachmaninoff. 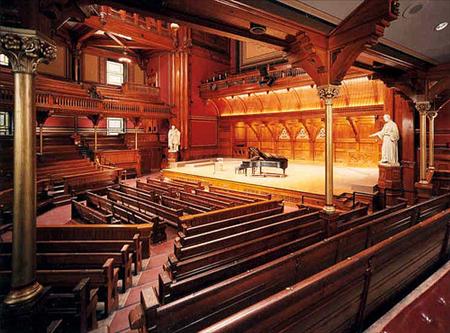 Inspired by Christopher Wren’s Sheldonian Theatre at Oxford, England, Sanders Theater is famous for its design and its acoustics. A member of the League of Historic American Theaters, the 1,166 seat theater offers a unique and intimate 180 degree design which provides unusual proximity to the stage. The theater was designed to function as a major lecture hall and as the site of college commencements. Although Sanders saw its last commencement exercise in 1922, the theater continues to play a major role in the academic mission of Harvard College.