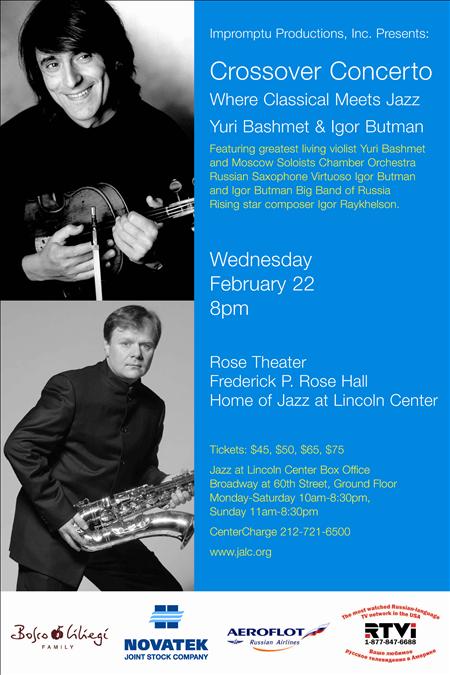 works for big band and strings.

Friday, February 24, 2006
A Musical Exchange With the Best Russia Has to Offer
Review by NATE CHINEN, New York Times

The promise of a dialogue between jazz and classical music has been a persistent lure over the years. It’s a preoccupation that turns experts into interlopers, compelling them to speak in a borrowed tongue. Crossover Concerto, an event held on Wednesday night at Jazz at Lincoln Center’s Rose Theater, illuminated that challenge, along with the lofty goal that inspired it. In tone as well as substance, the concert suggested cultural exchange.

This was true in more than one sense. The evening’s classical eminence was the violist Yuri Bashmet, with the Moscow Soloists chamber orchestra; jazz was the provenance of the saxophonist Igor Butman and his big band. Both artists had crossed over, so to speak, from Russia, where they have the stature of national heroes. Their presence in New York, well publicized on Russian-language television, had met with a tidal response: the roughly 1,200-seat hall sold out days in advance, with the vast majority of tickets going to native Russian speakers.

Nevertheless, after a square-jawed proclamation from President Vladimir V. Putin — stoically delivered by a Russian senator, it provoked a cavalcade of boos and then laughter and applause — the program proceeded in English. Mr. Butman, the pre-eminent public figure on Russia’s jazz scene, did most of the announcing; he also came across as the evening’s most forcefully charismatic soloist.

The emphasis there is on forceful: Mr. Butman is a steamroller of a saxophonist, with a broad tone and a hard-charging rhythmic instinct. His Teflon style provided a stark contrast to Mr. Bashmet, who has a darkly resonant sound and an intimate way with technique; he was most captivating at his quietest, as on an opening Bach minuet.

Those differences extended to the ensembles, which occupied opposite sides of the stage. Mr. Butman’s band set the tone with Rimsky-Korsakov’s “Capriccio Español,” rearranged by Vitaly Dolgov as a brassy fanfare; later, it brought the same blunt attack to Tchaikovsky. The chamber orchestra showed greater range and sensitivity on a bristling Shostakovich scherzo; Rachmaninoff’s “Vocalise,” which featured an excellent solo by Mr. Butman on soprano saxophone; and “Adagio for Viola and String Orchestra,” an elegy by Igor Raykhelson.

Mr. Raykhelson, born in St. Petersburg, was the evening’s third major presence; it was the United States premiere of his “Jazz Suite for Viola, Saxophone, Piano and Orchestra” that comprised the second half. He played the piano on that piece, which began with a faint hint of Gershwin and tumbled on through a bright, ricocheting swing, a stately tango, a waltz and a chiaroscuro lament.

Mr. Raykhelson’s suite marked the only part of the concert that integrated the two ensembles fully, and the only time the big band put aside its bombast for lucid color. Roughly halfway though, the piece called for viola and tenor saxophone together, and Mr. Bashmet and Mr. Butman rose to the challenge, with a perfect, haunting unison. 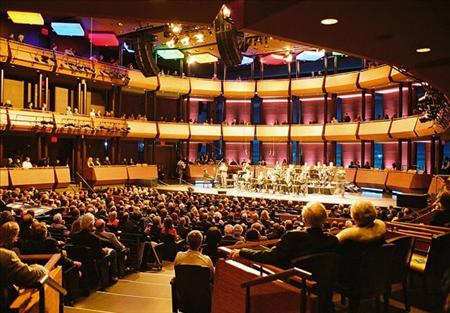 Jazz at Lincoln Center is a constituent company of the Lincoln Center performing arts organization, whose performing arts complex, Frederick P. Rose Hall, is located at 60th Street and Broadway in New York City, slightly south of the main Lincoln center campus and directly adjacent to Columbus Circle. Rose Hall is housed inside of the Time Warner Center. The complex opened in october 2004. The complex was designed by acclaimed Uruguayan-American architect, Rafael Vinoly and constructed by Turner construction.